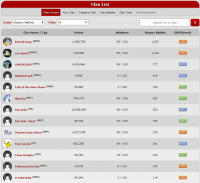 Clans are a great way to meet other players, strengthen ties with existing friends and to find members to trade with. While much of Pokemon Vortex is centred around your personal efforts, clans are based on working together as a small group.

How to Create a Clan[edit]

1. The leader of the clan must complete the all of the Gyms, Elite 4, Champions, Battle Frontiers, and Battle Maison.

2. Fill out an application for a new clan. This includes a clan name and a clan tag. A clan tag is a tag which is placed next to member's player name.

3. Wait for an administrator to approve your name and clan tag.

A clan is generally comprised of a leader, co-leaders, elitists and members. While there can only be one leader, there are limited slots for other special roles too. A clan can have a maximum of 3 co-leaders and 10 elitist members. Overall a clan currently has a maximum capacity of 100 members.

Each leader chooses how to promote differently, but it is advised to have trust in those who are promoted. Members who contribute to the clan in different ways and are loyal are good candidates.

There are a number of ways to promote your clan, which include asking your friends, starting a topic on the forums, posting an advert in the in-game chatroom under "Clan Recruitment", and posting in the #Clan-Recruitment channel in Pokemon Vortex's official Discord server.

Before getting to the recruitment stage, be sure to have a clear view of what your clan is going to be like, and any sort of requirements you will have for members to meet in order to join.

If you are aiming to have a top clan, this would typically have higher requirements in order to join, this could include things like a user's activity level, total experience, how long they have been playing, and a commitment to partake in clan battles.

Successful clans generally have incentives to attract potential members. This can range from clan exclusive giveaways, clan-run events and some even create private Discord servers for their members. 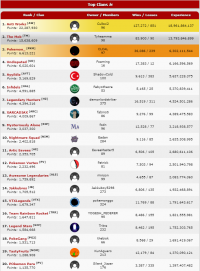 Joining and Picking the Right Clan[edit]

It can be hard to find the right clan with so many options and different kinds, but the decision can be made a bit easier by reflecting on your commitment level and what you're looking for in a clan.

Places where people post their clan adverts to recruit can be a great place to look, it gives a good indication of which clans are active, and you can ask questions about what their clan can provide and what they're about, to see if they would be a good fit.