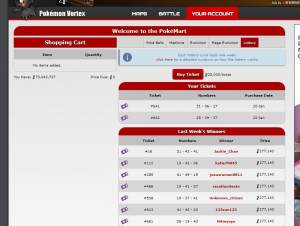 Lottery screen in the Pokémart

The lottery on Pokémon Vortex is somewhat similar to a real lottery where you would purchase a ticket with numbers on and every so often (In Pokémon Vortex's case - weekly) random numbers will be drawn that are then checked against everyone's tickets for matches to determine winners.

25,000 and can be purchased from the Pokémart in-game.

When you purchase a ticket, it will have a ticket number (increments in the order they are purchased by all users), three ticket numbers between 01 and 50 and the date your purchased the ticket. The ticket numbers is what you want to pay most attention to as these are the numbers that will be checked against the numbers drawn weekly on a Sunday at 00:00 GMT.

Theoretically it is possible for every single person who enters to win as well as it being possible for no one to win.

When each lottery cycle ends, the winners are automatically awarded their prize money and all tickets from that week are removed as well as the ticket ID # being reset.