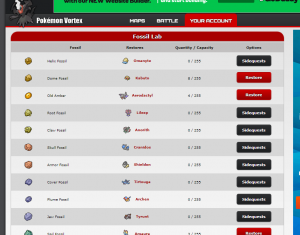 The Pokemon Fossil Lab is a facility that revives fossils back to their Original Pokémon Form.

Fossils are won through Sidequests in their respected region or unlocked through Mystery Boxes. Once a fossil is obtained, it is taken to the Fossil Lab where the item is revived into the Pokemon is was in its pre-fossil state.

In the regenerating process, a random type is assigned to the Pokémon with Normal being the most common by half of the total chances. In addition to this, each fossil also has a 1:10 chance to drop the corresponding avatar to the Pokémon being restored.

Unlike Pokémon redeemed anywhere else in the game through any means, fossil Pokémon are put into Pokéballs rather than a special type of ball.

Below is a list of each fossil and the Pokemon it revives into as well as the type rate at which they revive in percent.

A Fossil is a trace or piece of an organism from the past, such as a skeleton, shell, or leaf, preserved in the earth.

In Pokémon Vortex, Fossils of Prehistoric Pokémon are items which can be revived into living Pokémon using techniques developed by the Fossil Lab.

Note: All Fossils have a 50% chance of being restored to a Normal Pokémon and a 10% chance to be restored to one of the 5 special variants.