Pokémon Vortex is a free online Pokémon RPG. Created back in 2008 in memory of it's predecessor; Pokémon Crater Battle Arena.

Over the years, it has built up a fan base of millions, from the game itself, to it's numerous social media pages.

Before Version 2 closed down, it had 2.8 million registered users within the database who had accumulatively caught over 70 million Pokémon. As the game progresses, it gets updated in version numbers when there are big changes. This number does not change, however, every time a small update occurs such as a feature revamp or a new Pokémon added.

With the game currently in Version 4, it has just under one million registered members.

Pokémon Vortex sees updates all year round from new features, to events. Events can vary from random in-game tasks to obtain a Pokémon's form to random give-aways on the chatroom or social media pages. 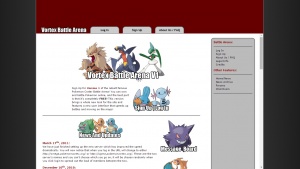 Version 1 of Pokémon Vortex was similar to where Pokémon Crater left off, without the addition of live battle. It started being developed on October 2nd 2008, not long after Pokémon Crater had closed on December 1st 2007. Pokémon Vortex had it's final public build, ready to go out on September 12th 2009, two months after it had it's closed BETA and was an instant hit globally. Some of it's more popular countries included the United States, United Kingdom, Brazil and Peru.

The closed BETA for Version 1 was invitational where the current forum members waiting for the games release could apply within a forum topic. In the end, 50 people were invited a long with a few select friends of the game and forum staff.

A lot of it's following came right from Pokémon Crater where they had been waiting for something similar to be brought to life. With the popularity of the game increasing at a rapid rate, the early days of Version 1's public build seen a lot of down time due to the servers not being able to handle the traffic load that was trying to access the game.

In December 2009, the game had generated enough money from advert revenue to move the website to dedicated server hosting and finally put a stop to the constant downtime and lag. With this change came a flood of more people as the word got around that Pokémon Vortex was finally playable, problem free.

The main attraction of Version 1 was it's competitive leader board called Top Trainers which was a list of 50 users in descending order of points. Their points were calculated from the users; toal Pokémon, total battle count, total experience, average experience and unique Pokémon. The points calculation formula used in Version 1 through to Version 2 was flawed in the sense that it heavily favoured players who had played the longest to gain the highest battle count which later caused the Top Trainers to lock in fixture during Version 2 so no new members could climb the ranks.

Version 1 seen the very first event ever held on Vortex on October 31st 2010 which seen Rotom (Halloween) released on the maps for three consecutive days. With the huge success of this event drawing in over 40,000 users to take part, this shaped the future of how Pokémon Vortex would later introduce new Pokémon and seen the beginning of something that continues to this day; seasonal events.

Pokémon Vortex Version 1 was scheduled to update to Version 1.8 in April 2011, the first of it's big version shifts. 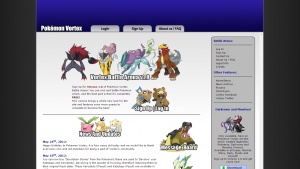 Version 1.8 was the first huge update added to Pokémon Vortex in late 2010. It brought in many new features and tweaks to old ones such as purchasable Pokémon in the Pokémart, event battles and seasonal events for exclusive Pokémon. Notable Pokémon brought into v1.8 are; Celebi (Eternal), Stantler (Christmas), Dratinire, Dratinice and Dratinilic along with the entirety of Generation IV Pokémon.

v1.8 seen the addition of many new NPC battles to obtain badges such as the Unova League, Orange Islands and many pre-set event battles based on Villains of the original games and Anime, for example, Team Rocket and Team Magma.

Sidequests and achievements were among the many updated included with v1.8 which were well received by the player community although the Sidequests were only available up to the end of Kanto.

Mid-version 1.8 had the addition of the mobile mirror site as an update and was the only way to obtain the three previously unobtainable Dratini forms.

Version 2 was the last version with everyone's current data. 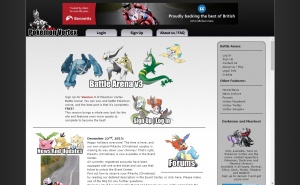 Version 3 was a new start for Pokémon Vortex. All data from the previous versions was reset in an effort to revive the games loyal player base and eradicate the damage done over the years by people automating battles and various things to storm the leaderboards.

With the game starting a-fresh, it gave development a chance to add certain things with more ease than would have been with tens of millions of Pokémon in the database. One of those things being gender assignment to Pokémon which led to gender based evolution.

The biggest addition to v3 was the clan system that was implemented. It allows players to create and join teams of 2 - 400 Players and compete with other clans in dominance of the Top Clans leaderboard which is similar to that of the Top Trainer leaderboard except it would contribute the entire clan members towards its total points. Clans were closed down on 10th April 2016 to be restructured for v4 based on community feedback and development ideas.[?]

Another big change to v3 was the addition of Day/Night time on the maps which allowed the user to set their time preference in their account options and search the maps for Pokémon in the day or at night. Pokémon differ based on the time of day, for example, Murkrow can only be found in the night while Latias can only be found during the day. 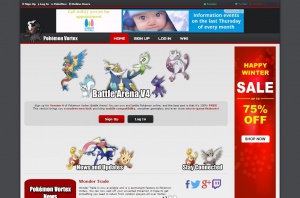 Version 4 was released on November 13th 2017 and came with many new features, improvements and fixes. The biggest addition was that of PokéBay, an auction system that allows players to auction their Pokémon, Items, Promo Codes and Avatars.

Another big change was the entire UI of the website. It was redesigned to give it a more modern and sleek look as while still keeping a similarity to the original UI adopted from Pokémon Crater as this has always been an important factor when developing the website.

One of the most anticipated additions by the players was the introduction of generation 7 Pokémon with a lot of speculation leading up to the release on how Ultra Beasts would be obtainable.

The release of v4 came with multiple in-game hints at upcoming updates too with placeholders for future features not yet available such as saved teams, achievements and a publicly available API which was explained on the game dashboard in the version overview with the following:

“ With the release of v4 and even more so, the wait some of you have had to endure for v4, it has been decided to take a new approach on version changes and updates in general. Starting now, updates will be released as they are made and completed rather than storing ideas to build one large update for a version shift. If you don't undertand what this means, just think of it as there will be more updates, smaller but more often. ” 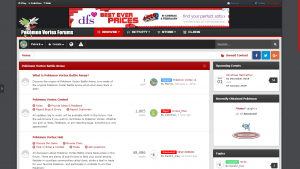 The forums is one of the main community sources for Pokémon Vortex and has seen many changes over the years. With a small moderating team consisting of less than 10 people at a time, it has progressively got less active due to people preferring to use the alternative methods of communication such as the chatroom. Version 1's forums, which was completed and running before the game was, had 230,000 registered users before it was wiped and reset for the release of Version 3. The main draw to the forums is it's guides, closely followed by it's trade sub-forum. Thousands of unregistered people use the forums daily for it's detailed guides on how to play the game and where/how you can get certain Pokémon/Items.